Autodesk Inventor is a computer-aided design application for 3D mechanical design, simulation, visualization, and documentation developed by Autodesk. Inventor allows 2D and 3D data integration in a single environment, creating a virtual representation of the final product that enables users to validate the form, fit and function of the product before it is ever built.

3D PDF is a standard Adobe PDF document that contains interactive 3D content. The user can view 3D CAD models from Inventor without any need for CAD software with the help of 3D PDF.

‘ProtoTech’s 3D PDF Exporter’ for Autodesk Inventor allows the designers to export their 3D designs to highly portable 3D PDF (.pdf) format which can be shared easily with others. 3D PDF file can also be exported by Inventor’s native ‘Publish 3D PDF’ feature. 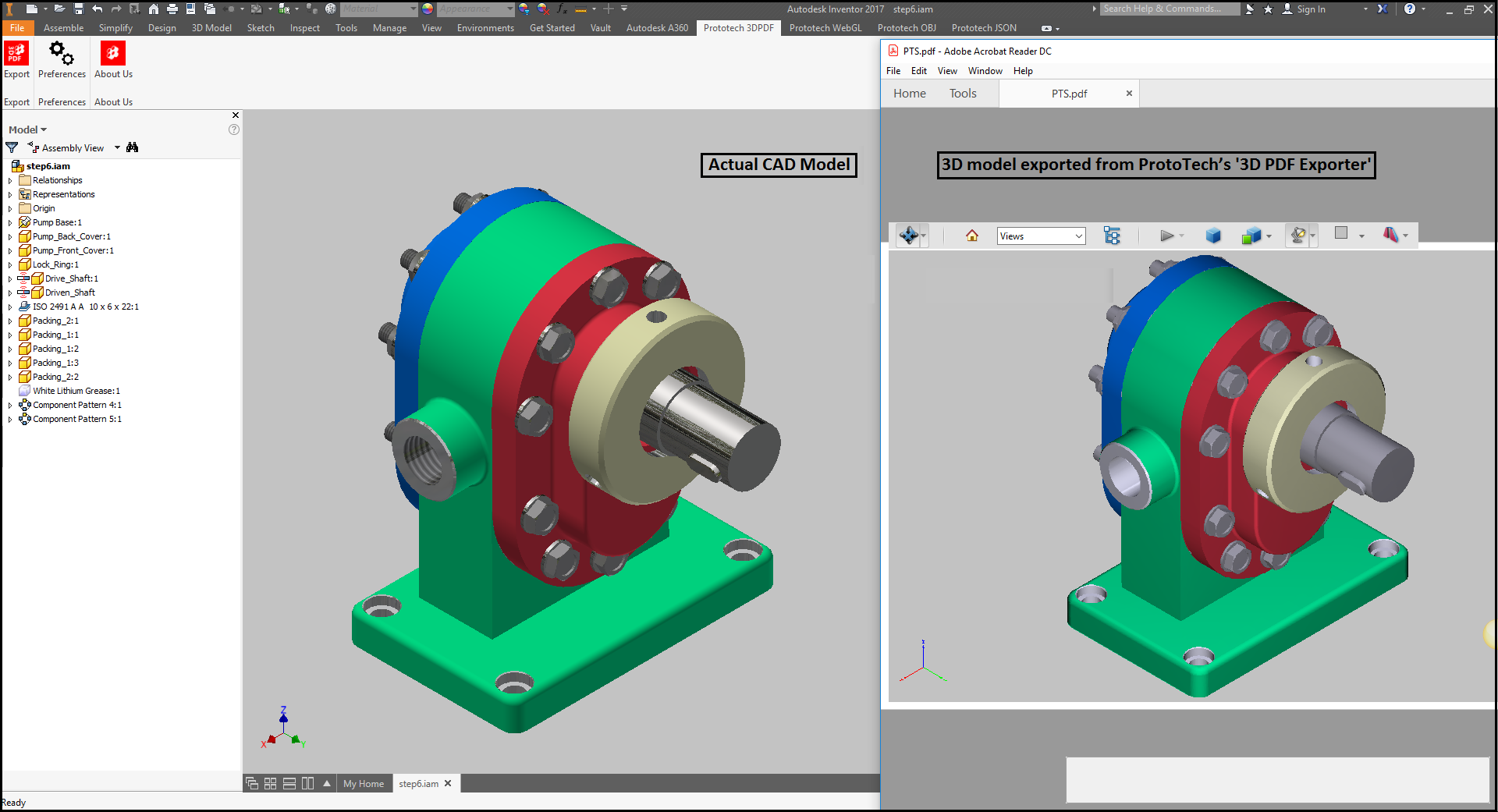 Fig 1: In left the actual CAD model and the right one is the 3D model exported from ProtoTech’s 3D PDF Exporter plugin

The detailed description of Features of ProtoTech’s 3D PDF Exporter: 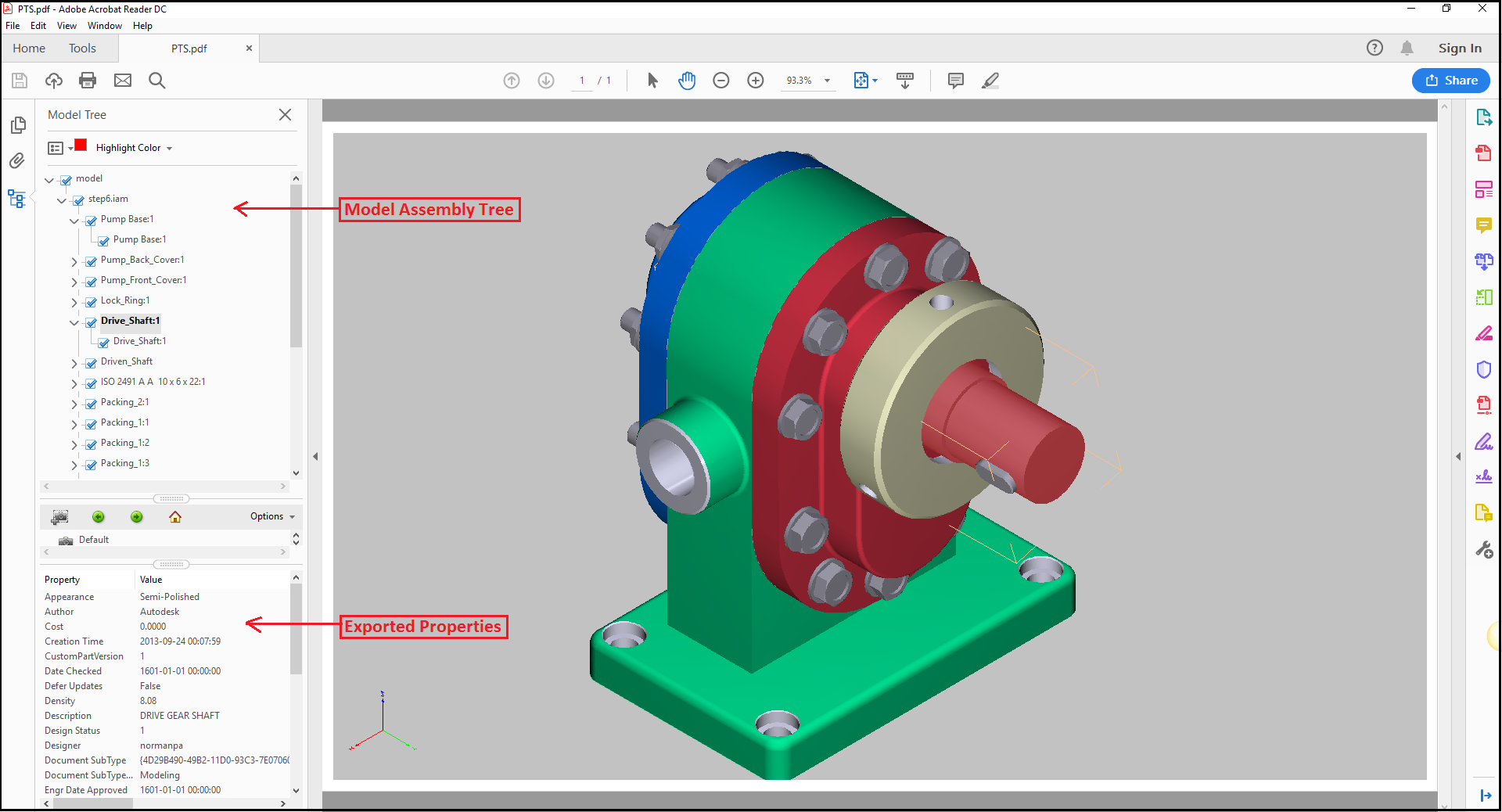 ‘ProtoTech’s 3D PDF Exporter’ for Inventor provides a wide range of extra features over ‘Publish 3D PDF’ in Inventor as described below,

File size is a major factor while comparing exporter plugins. ProtoTech’s 3D PDF Exporter is a clear winner here. Most of the 3D PDF files exported by ProtoTech’s plugins are smaller in size than the files from ‘Publish 3D PDF’ in Inventor. The reduction in file size varies and it is in the range of 30% to 150% for typical files while there is no perceptible difference in the visual quality at all. Refer the following Image for visual appearance.

On performance front too, ProtoTech’s 3D PDF Exporter beats the native exporter all hands down. ProtoTech’s plugin is 6 to 10 times faster in exporting the file out – again without compromising the visual quality.  Here are some numbers:

Polygon reduction is an advanced functionality provided by ‘ProtoTech’s 3D PDF Exporter’ over ‘Publish 3D PDF’ in Inventor to reduce the number of triangles so that the File Size of the model can be reduced as per user’s requirement. The user can control the quality of exported tessellated data via the following two options 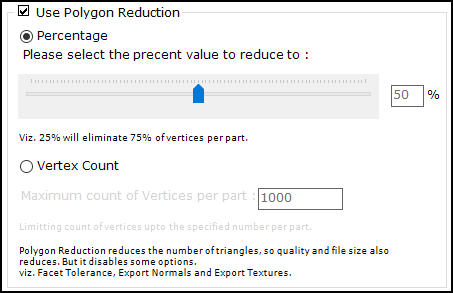 Security is today’s biggest concern to the business models and for the software industry. ProtoTech’s 3DPDF Exporter provides a security feature, i.e encrypt the data and secure your 3D-PDF exported file. This feature allows the user to generate a password protected and encrypted 3D PDF file to attain your security goals. Native ‘Publish 3DPDF’ does not provide any security feature. Refer the following Image.

Disable Measurement Tool is another security feature provided by ProtoTech’s 3D PDF Exporter. It allows the user to disable measurement of any entities in PDF graphics view within Acrobat PDF viewer. If the user wants to share the 3D-PDF file and to conceal model’s measurements, then it is a very useful feature. Refer the following Image.Native ‘Publish 3DPF of Inventor’ does not support this important functionality.

This will allow the user to disable any user selections in an exported 3D PDF file. Native ‘Publish 3DPF of Inventor’ does not support this feature. This is an important feature for users who want to protect their IP and design and keep it secure from unwanted copy, the leak of information etc. Refer the following Image.

Native ‘Publish 3D PDF’ in Inventor does not export transparency. 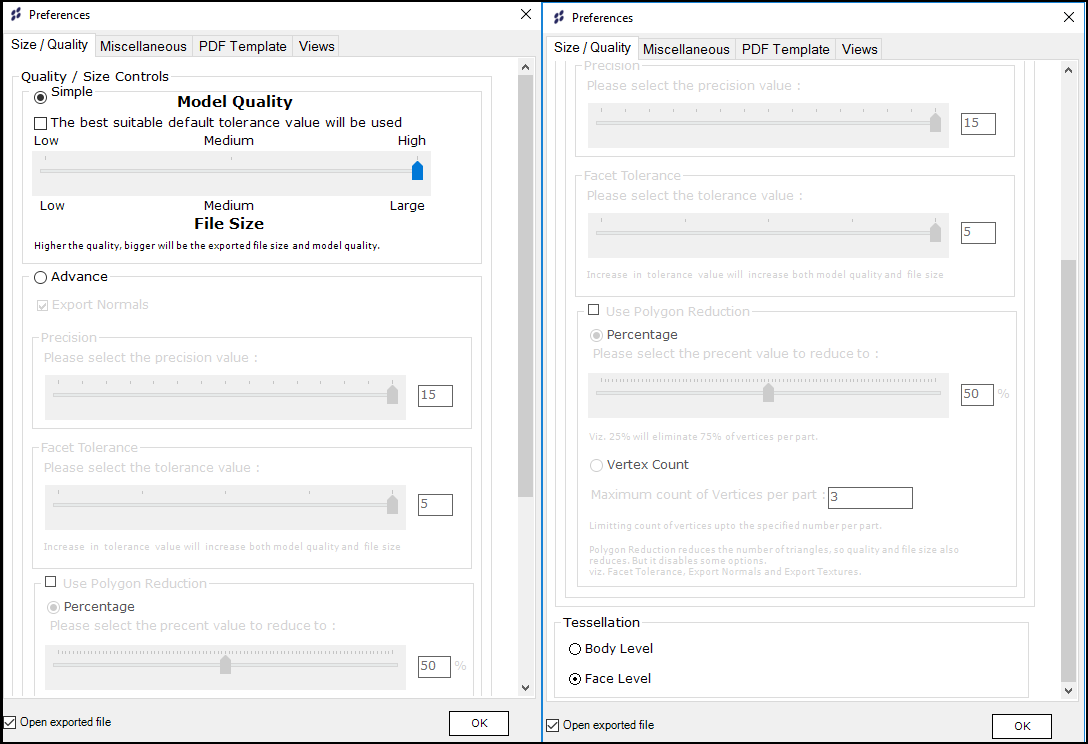 ProtoTech allows user to control the export of different entity types such as,

Native ‘Publish 3DPF of Inventor’ does not export wire bodies.

12. Support for older versions of Inventor:

PRC is the next generation of 3D graphics format used for embedding 3D data into a PDF file.  Significantly more feature rich than U3D, PRC allows highly compressed geometric and visual representations to be added to 3D models and allows detailed structure, geometry, and product manufacturing information (PMI) to be included.PRC should be the format you investigate further as it is gaining ground within engineering, manufacturing, aerospace, geophysics, mining, and medical industries as the preferred encoding method for PDF documents.

Option for saving 3D PDF with default tolerance setting. Here the same tessellated data would be exported in 3DPDF which Inventor internally creates for display in its own Graphics window. So the user will have a similar viewing experience in 3D PDF file and export time would be less. Refer the following Image. 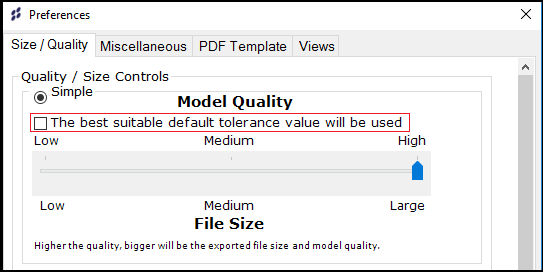 This feature allows the user to export ‘Multiple Views’ from Inventor to 3D PDF file. Multiple Views supported by ProtoTech’s 3D PDF Exporter are shown below, 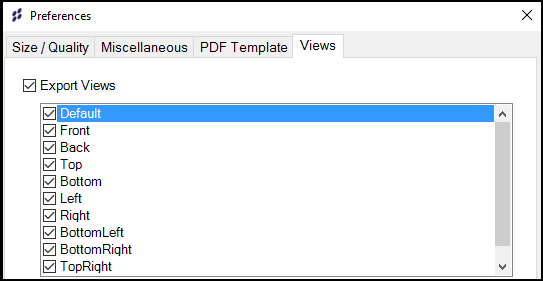 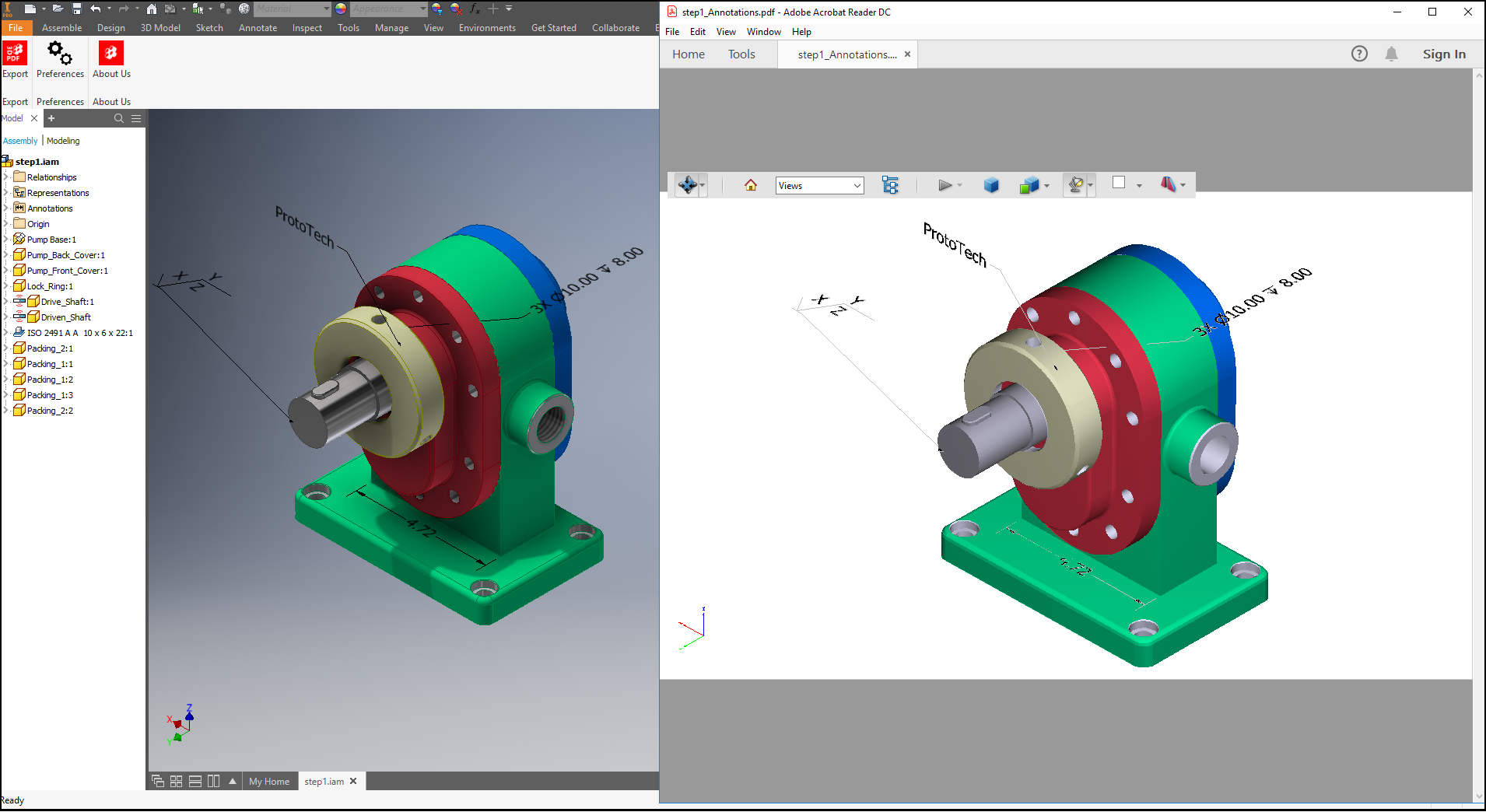 Why use ‘ProtoTech’s 3D PDF Exporter’ instead of ‘Publish 3D PDF’ in Inventor?

All the above comparison rolled into one table as shown below, 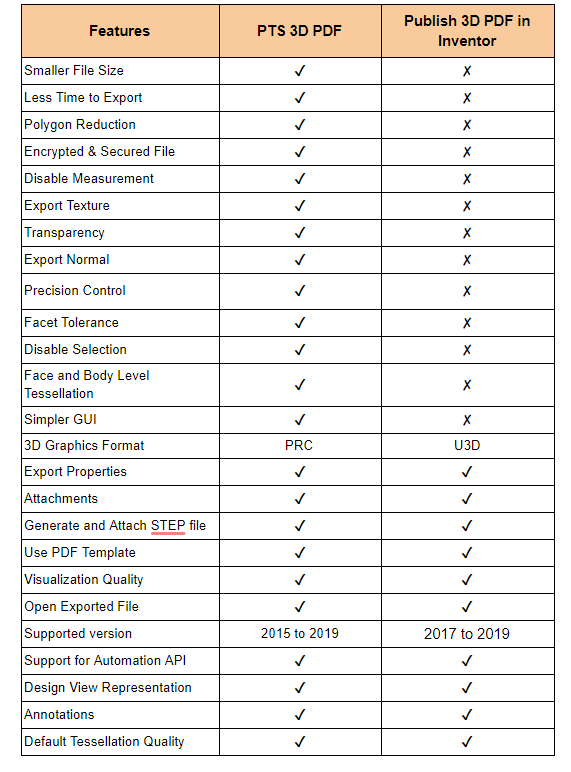 In essence, we can conclude that ProtoTech’s 3D PDF Exporter is better in all aspects i.e. in terms of Simplicity, Functionality, Security, Visualization etc. for many CAD users.

About the Author: Prototech Solutions

ProtoTech Solutions is a software development and consulting company that specializes in rapid development of engineering software by providing fast, reliable and accurate solutions. PTS is a private firm composed of well-trained and experienced professionals who are fully committed to helping our customers accelerate their development programs and build advanced solutions.

Our game testing strategies varies for each type of games and customized to its testing needs.
Following are a few test strategies we commonly follow while testing game applications.

Get Your Renowned Game’s Strategy Here